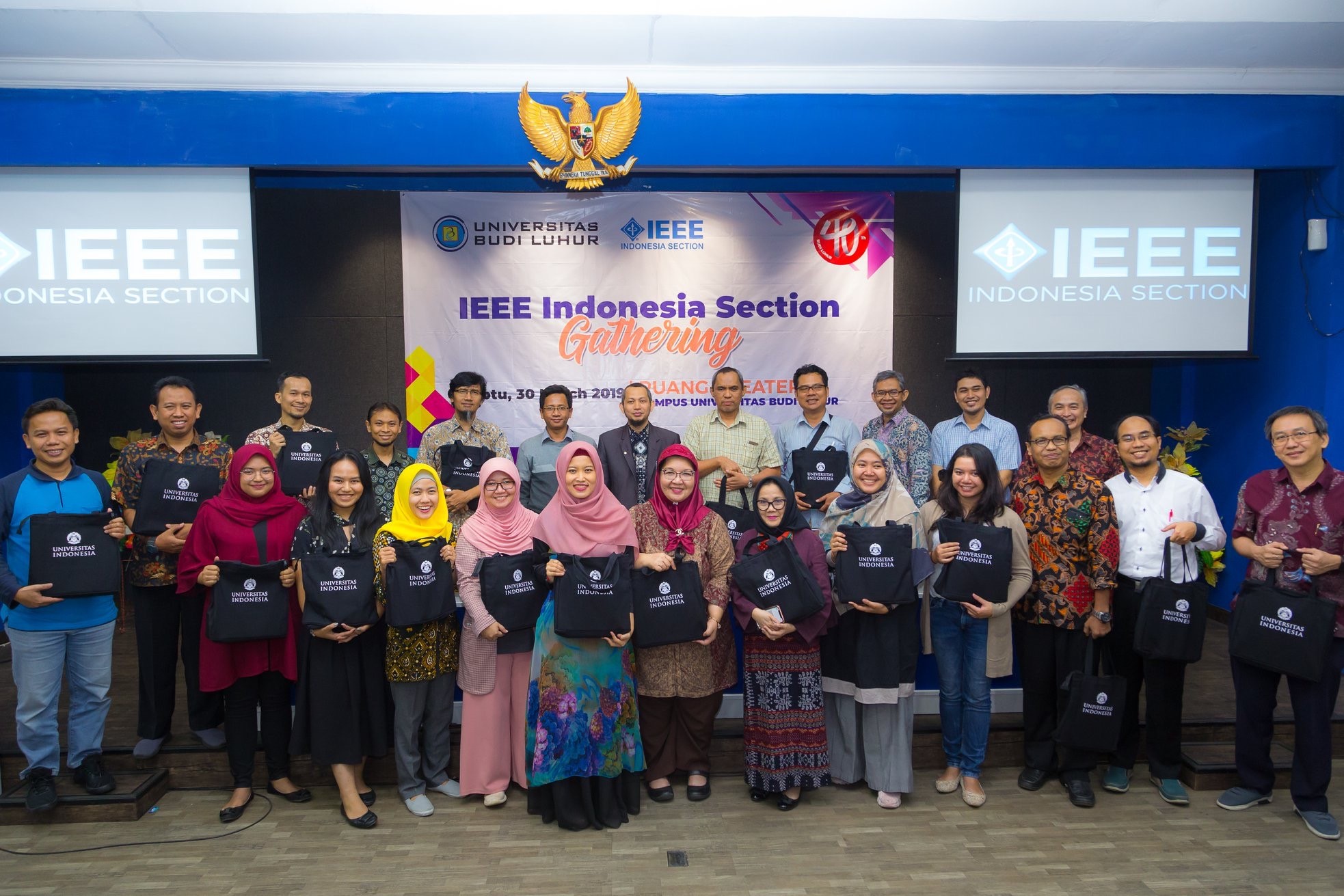 We also gladly to announce that our chair was being elected as student coordinator representative IEEE Indonesia Section. We proudly announce that some of our IEEE SB TEL-U Officers have successfully form an international collaboration with IEEE Student Branch Chulalongkorn University, Thailand.
The event is officially called IEEE Student Branch Telkom University International Student Visit 2018
Our delegates will depart to Thailand on behalf of IEEE SB TEL-U and Telkom University.
The event will be held at : Faculty of Engineering, Chulalongkorn University, Bangkok, Thailand On the first day of Introduction about NodeMCU. NodeMCU an open source IoT platform. It includes firmware which runs on the ESP8266 Wi-Fi SoC from Espressif Systems, and hardware which is based on the ESP-12 module. The term “NodeMCU” by default refers to the firmware rather than the dev kits. The firmware uses the Lua scripting language. It is based on the eLua project, and built on the Espressif Non-OS SDK for ESP8266. It uses many open source projects, such as lua-cjson and spiffs.
After that, we did some experiments, such as experiment 1 Blinking on board LED on NodeMCU with Arduino programming; experiment 2 NodeMCU-Blinking external LEDs; and experiment 3 Connecting NodeMCU to Wi-Fi.
On the second day, we did many experiments in a day. But before experimenting, the speaker explained the introduction of ThinkSpeak and Blynk. ThingSpeak is an Internet of Things (IoT) platform that lets you collect and store data sensors in the cloud and develop IoT applications. The ThingSpeak IoT platform provides apps that let you analyze and visualize your data in MATLAB, and then act on the data. Sensor data can be sent to ThingSpeak from Arduino, Raspberry Pi, BeagleBone Black, and other hardware.
Meanwhile, Blynk is a Platform with iOS and Android apps to control Arduino, Raspberry Pi and the likes over the Internet. It’s a digital dashboard where you can build a graphic interface for your project by simply dragging and dropping widgets. It’s really simple to set everything up and you’ll start tinkering in less than 5 mins. Blynk is not tied to some specific board or shield. Instead, it is supporting hardware of your choice. Whether your Arduino or Raspberry Pi is linked to the Internet over Wi-Fi, Ethernet or this new ESP5266 chip, Blynk will get you online and ready for the Internet of Your Things.
Based on the explanation of ThingSpeak and Blynk, we did follow up some experiments, such as experiment 4 Introduction to Blynk App- Control of LEDs using Blynk App; experiment 5 Introduction to Cloud Storage model and data analytics through ThingSpeak-Twitter updates using ThingSpeak; experiment 6 IoT based Weather Update System; experiment 7 IoT based Waste Management; and experiment 8 IoT bassed Home Automation System.
On the last day, we did the last experiment that is experiment 9 IoT based Toll Gate System. In addition, the speakers held an IoT idea competition for all participants. We propose the idea of IoT with the theme of “Smart Transport” to improve the efficiency of public transportation utilization. The main idea that we propose is to integrate passengers with the driver of public transport so that public transport drivers can know the position of the prospective passengers. In addition, we also propose a system of behavioral information on public transport, so it can be known the number of public vehicles that are less personnel with excess. In 16th September 2017, IEEE Student Branch University organizes an event called IEEE Open Mind 2017. This event was held in Multimedia 3rd floor Tokong Nanas Building, Telkom University, Indonesia. IEEE Open Mind 2017 is an event for Telkom University students to introduce about IEEE in general, IEEE in each region, IEEE Indonesia Section, and also IEEE Student Branch Telkom University. In this event, we explain some features from IEEE (e.g., the advantage of becoming IEEE member, activity/event held by IEEE, IEEE SB Tel-U activities, and also IEEE SB Tel-U achievement). We invite Dr. Muhammad Ary Murti as a speaker at this event. This event was very cool, with some ice-breaking games from the moderator. ONE DAY WITH IEEE SPS CHAPTER

Limited seat available. Grab your ticket now and get your National TAK (for Tel-U students), Certificate, Seminar Kit, Lunch, and Snack. The ticket price is only:
– 25k for IEEE Member
– 40k for Non-IEEE Member University of Diponegoro has successfully held the IEEE Indonesia Student Congress 2017 and also showed the beauty of Semarang city. ISC is an annual student congress for IEEE Indonesian Student branches to share and express ideas and thoughts for the future of IEEE Indonesia. Bringing the theme of, “Masterpiece of Technology for Better Indonesia”, the event was held on 29th– 31st July 2017. Three days of great seminars, conference, discussion, contests, gathering, and city tour.

The ISC starts with a rave, seminars, and discussion from IEEE professionals and experts, namely Ms. Fitri Yuli Zulkifli as IEEE Indonesia section chair, Mr. Khoirul Anwar, Mr. Lingga Wardhana, Ms. Agnes Irwanti, Ms. Kurnianingsih, and Ms. Amanda Isa. The first day summed up to be a great experience for us. By the next day, there were discussion between IEEE Indonesia student branches, website tutorial by Ms. Amanda Isa, and fun city tour. We went to Sam Po Kong Temple and the legendary Lawang Sewu for enjoying the city tour.

There was game session and awarding night by the second night. The awarding night winners consist of Call for paper contest award, photo contest award, most active student branch award, and best student branch recruitment program award.  Telkom University got another award for “IEEE ISC Most Active Student Branch 2017.” On the same night, we decided that ISC 2018 will be held in Bandung, with Institute of Technology Bandung as the host event. The night was emotional as we have a further strong connection between each other.

We got a lot of suggestions and ideas from other student branches. We shared experience and stories with them. What a great experience we got there. The unforgettable excitement with new friends and relations. It’s three days that you need at least once in your life and we crave for more of this in the future. And most importantly, together, we are building the bond for making masterpiece technology for better Indonesia.

“What a place, what a friends, what a beautiful time! See you guys next Year!”
Cesio Raihandary, Telkom University, 2017
External Relation Div. IEEE SB Tel-U On May 13, IEEE Indonesia Section officially has a new Chair. We’d like to congratulate,

from University of Indonesia, as the elected chairwoman of IEEE Indonesia Section!

This handing-over event was held in Binus International, Fx Campus Jl. Jend Soedirman, Jakarta. The event started from 1 p.m. until 6 p.m and was opened by Dr. Ford Lumban Gaol as General Chair of the event. Then the next session was keynot speech from IEEE Indonesia Section and IEEE Computer Society Chapter.

There was also Chapter and Joint Chapter Report from Societies in IEEE Indonesia Section, not forget to mention the Women in Engineering and Young Professional. After that, there was photo session and coffee break and the event was continued by the main agenda: Chairmanship Handing Over, and followed with speech by IEEE Indonesia Section new chair, Dr. Fitri Yuli, also advisory board speech by Mr. Arnold Djiwatampu and Dr. Wahidin Wahab.

It was a great moment to gather with IEEE Indonesia section officers and also IEEE Student Branches. We put a lot of hope and ready to bring IEEE Indonesia Section to a great future.